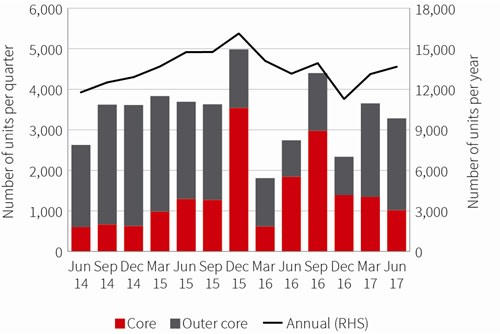 These days Londoners seemingly hate it when its doing well, but hate it again when its doing nothing. The former of course means that prices are growing, undermining affordability and stretching already stretched budgets, especially for first-time buyers and renters. In contrast, price falls may be a signal of underlying economic weakness and for owner-occupiers, a challenge to pension planning.

I recall a conversation with a journalist a couple of years ago, who noted that he had to shift 'positive' news coverage of improving values as the growing share of voice from priced-out renters howled at the insensitivity to their plight.

Well, as it is said, 'there's good news, and there's bad news'. I guess it’s a matter of perspective.

The news is this. The Central London market is back. Well, not quite - but at the same time I don't know that it ever really left. Clearly the top end of Prime London has adjusted down to the tune of nearly 15% and a few developers exposed a bit further down the foodchain also have been quietly unloading stock at more favourable prices than planned.

It's not that incentive activity has stopped, it’s that there are signs of improving demand which has made it less important. Clients are pushing values again, and their clients are buying. The signs of life-as-normal are becoming more common.

And our numbers have begun to bear this out. Central London new build prices are up 0.1% over H1 2017, with volumes up 17% compared with H2 2016. Hardly figures to get too excited about, but when placed in context with -4.1% and -17% a year ago, you might say that someone has reached back and is about to fling a pebble into the middle of that pond. Cue that ripple, we hope.

I say 'we hope' because the need to enable higher supply volumes is unabated. Figures there aren't quite so good.

New starts are up by 3% in H1 2017 compared with H2 2016, but down 19% on H2 2015. The pipeline is flattered by several tall buildings that got going before the market softened and the wave of activity behind them is looking a bit less full.

This is pretty important because it comes just as the Mayor has launched his new Housing Strategy for London. There's lots of good and well-meaning stuff in there and bears the broad strokes of Government's housing White Paper. More players, more innovation, more modular. Oh - and a lot more affordable housing. Mustn't forget that bit.

50% affordable housing ambitions are pretty steamy. However Sadiq Khan is well within rights to say 'I warned you'. He won largely on a 'housing for the many' ticket and while he has been hard-hat-ing and hi-viz-ing his way around live schemes, he has never softened on this ambition.

Most developers have been running appraisals that, at least initially, work back from 35% affordable. But 50%? Don't think so. The land market impact may well push development activity backwards, just as momentum seems to be swinging back in favour of the sector.

This would not be good news. Not good for anyone.

So, signs of life in Central London. Its weakness has been largely a political creation. Let's hope that political intervention doesn't become its downfall before we get going again.