Research analyst Tom Colthorpe explores how age profiles vary between cities and commuter belts, and what this means for Living real estate.

Based on our latest report European City Dynamics and its exploration of shifting populations, our latest blog delves into the changing picture of how individuals interact with a city throughout their lifetimes and the impact of this on future European housing demand.

Living, as an asset category, is fundamentally about people – who they are, what life stage they are at, and how they want to live. Demand for different homes comes from all age groups – so understanding age profiles, and how they are forecast to change, is one way to look at pools of relative demand at a national, city and local level.

Between the centre and suburbs, a city’s demographics can change markedly, with a range of implications for planners, legislators, developers and investors. Cities often extend beyond their administrative boundaries, into Functional Urban Areas (FUAs), of which there are 64 in Europe with a population of over one million. 48% of their populations live in the city, while a small majority live in the commuter belt.

While there are some similarities, their age profiles are strikingly different.

Younger people are more likely to live in the city – 2 million more aged 20-34 live here compared to respective commuter zones, attracted by the proximity to work and density of cultural amenities. But households during family formation years are likely to move into commuter belt zones, where there is often more space and lower affordability pressures. This are nearly 5 million more individuals aged 35-64, and over 3 million more dependents (0-19) living in the commuter belts. Retirees (65+) are more balanced, favouring the commuter zone by just 0.5%, equivalent to 1.7 million more people in the urban periphery. Reasons are likely to be complex and city-specific but may include the relative availability of social, transport and green infrastructure alongside their wealth and purchasing power.

While there are broad regional trends – the age profile spreads in Northern and Western Europe are more pronounced, while these are less prominent in Southern and Eastern Europe – each individual city predictably has its own patterns.

Figure 2: Spread between city and commuter belt populations, by age group (regional, FUAs of over 1m) 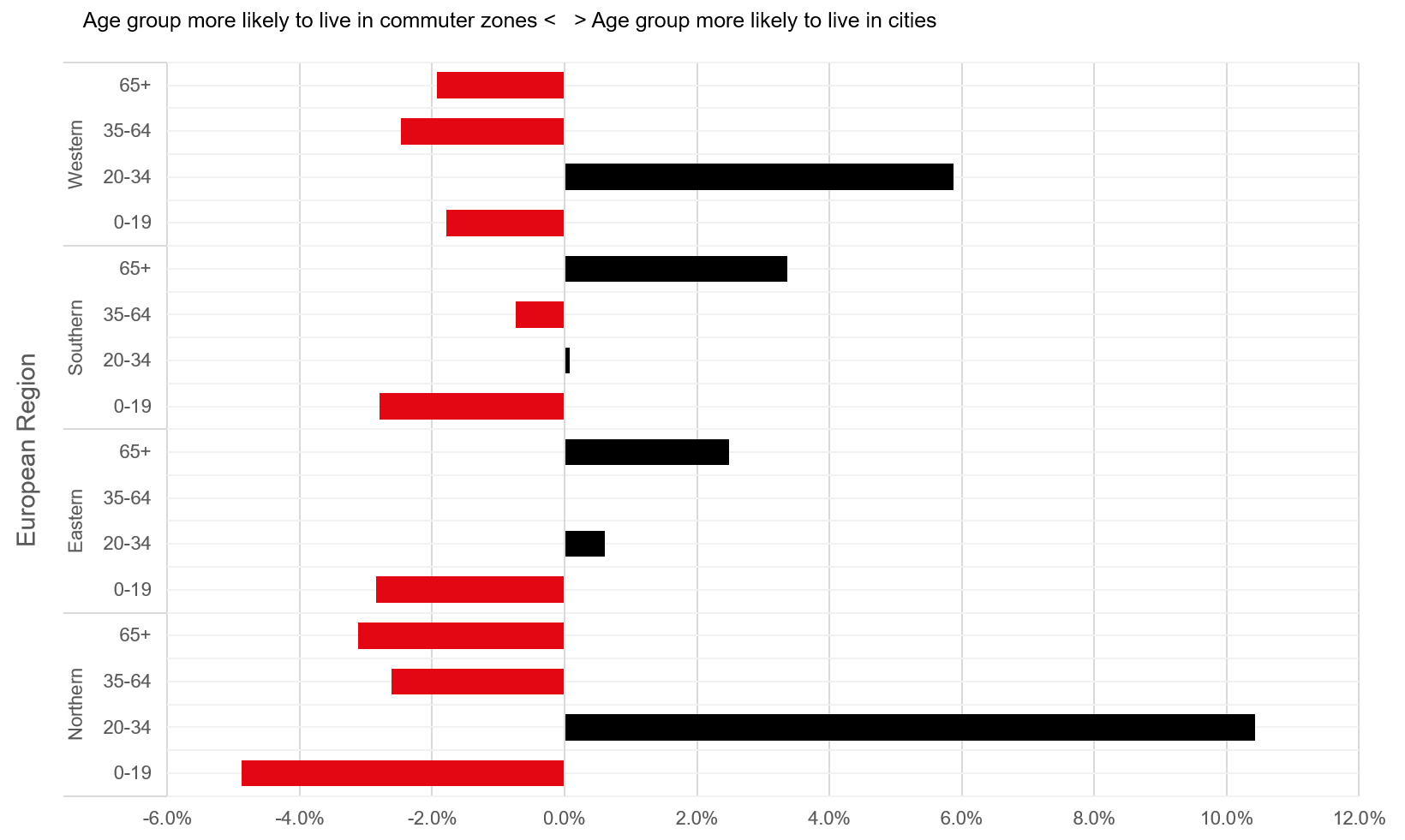 However, this trend could be subject to moderate changes moving forward, as growing affordability pressures might push younger people further from the centre, while homeowners, as they age, are perhaps becoming more reticent to move from prime locations to commuter zones. Further, pensioners, who are Europe’s cities fasting growing age group and often asset-rich, might begin to adjust their preferences to live in central locations, given their lower space requirements and often higher spending power.

This paints a complicated and potentially changing picture of how individuals interact with a city throughout their lifetimes, which will have knock-on effects on demand for appropriate homes. Understanding these specific dynamics of city-level demand, therefore, is significant for those involved with delivering Europe’s new homes.