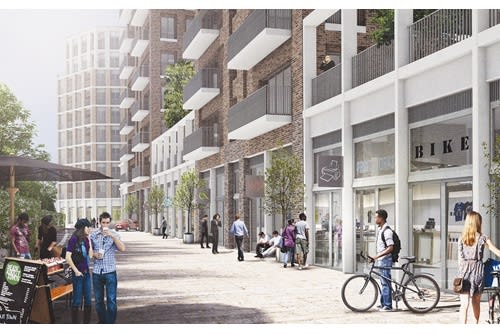 The UK isn’t building enough homes. This may have been a shocking statement 30 years ago, but today it has almost become a cliché. However, what we have seen recently is renewed political impetus, exemplified by Sadiq Khan’s ambitious housing targets and willingness to intervene in the planning process to get projects moving.

The UK isn’t building enough homes. This may have been a shocking statement 30 years ago, but today it has almost become a cliché. Naturally the problem is most acute in London, where there is a striking shortage of affordable homes. A number of different approaches have been adopted to alleviate the crisis, each with varying degrees of success. However, what we have seen recently is renewed political impetus, exemplified by Sadiq Khan’s ambitious housing targets and willingness to intervene in the planning process to get projects moving.

JLL, on the behalf of DTZ Investors, recently secured planning permission for a mixed-use development in Wandsworth. The scheme involves replacing a large Homebase store with 385 residential units, 35 per cent of which will be affordable, along with retail and leisure space. Originally, the project faced opposition from local action groups and residents. It was twice rejected at planning committee level, despite the planning officer’s recommendation for approval. Eventually, the mayor of London stepped in to grant approval.

As Mr Khan outlined in his recent event at City Hall, this development will improve housing provisions in Wandsworth, make better use of space and help improve transport links by contributing to the new entrance to Wandsworth Town station. However, without the intervention it would likely have been held up by local planners.

For local planning committees, the reality is that denser housing and more affordable homes need to be built. Holding this rising tide back is not a tenable solution, as the end game may see a centralisation of planning decisions. Put simply, standing in the way of more houses could see local committees stripped of their authority.

To capitalise on political momentum, the property industry and planning bodies need to work together to create projects that satisfy local communities while tackling wider housing problems. A clear and open discussion is vital to providing affordable homes and a satisfied community. However, denser housing does not need to mean the tower blocks of the 1960s. It can involve flats designed for sharing or a more innovative use of space. The height of a development itself should not be a deal-breaker, as new materials and approaches to design can significantly reduce the visual impact of large buildings.

There are no sides

The best approach for pushing these developments forward is to involve all stakeholders constructively. We should not consider property developers and planners as ‘sides’, but as partners.
Developers and designers need to understand local sensibilities; engage with community groups in areas such as heritage, public services and businesses; and be willing to offer innovative solutions tailored to the community. Meanwhile, planning committees need to forego NIMBYism and work with a more open mind. Centralised planning decisions may carry a greater risk of unforeseen consequences. On the other hand, intractable local committees can cause gridlock in the planning process – with national repercussions. Ironically, it is this highly localised view of planning that ultimately hurts communities by precipitating national infrastructure and housing problems.
The best planning committees balance the needs of their communities with the national interest by collaborating with developers. But Mr Khan’s intervention may be a sign of things to come.

The above blog was taken from Ashley Perry’s regular column with Construction News.