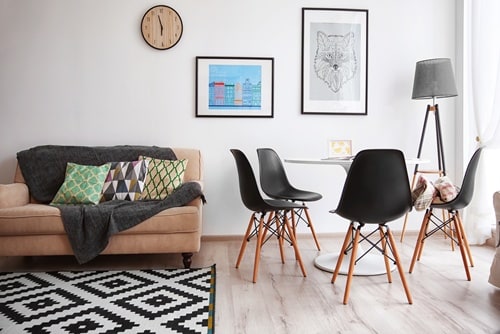 This question is frequently tackled by behavioural psychologists. So, what is the answer? Well, as is often the case with the human mind – it depends. It depends on individuals and it depends on their circumstances.

This question is frequently tackled by behavioural psychologists. So, what is the answer? Well, as is often the case with the human mind – it depends. It depends on individuals and it depends on their circumstances.

‘Stuff’ can certainly make some people happy. However, there is also a growing school of thought that a minimalist lifestyle can also make people happy. In the Netflix documentary Minimalism: a documentary about the important things Joshua Fields Millburn and Ryan Nicodemus (aka The Minimalists) outline a lifestyle of reducing possessions in order to lead a more enjoyable life. They literally believe that less is more and they are not alone. Their emails, podcasts and blogs have a following of around 20 million like-minded people. There is also an increasing body of scientific evidence to support a minimalist lifestyle. Studies by P Brickman (1978), Chaplin & John (2007) and Dunn et al (2008) have all demonstrated that buying possessions does not make people more happy – in fact, they found a materialistic lifestyle can in fact make people more unhappy.

But what does this mean for housing? JLL’s recent research Micro Solutions to a Macro Problem explores the role that Micro Living could have in helping to solve the housing crisis. Our research highlights that minimum space standards should not be used as a proxy for good design quality. In fact, using clever engineering solutions makes it possible to create new homes incorporating flexible spaces that are desirable places to live.

But building smaller in the UK has actually already begun, and at quite a significant scale. Our research revealed that there are already more than 550,000 micro homes in the UK that are below the UK minimum space standard of 37 sq m. That’s more than the total number of homes in Birmingham.

But who lives in those homes? Demographic analysis from CACI reveals there to be a roughly 50:50 split between affluent career climbers and struggling poorer people.

This highlights a crucial point about building smaller – it has to be done for the right people, who have the ability to make a choice. Protections should be in place for the vulnerable and space standards are a part of the protection mechanism that exists. But thinking too rigidly around space also ignores the fact that half of the occupiers of these existing UK micro homes are likely to have sufficient income in which to be able to choose somewhere else to live. But they haven’t. They have made an informed decision that the micro home will satisfy their housing needs.

It should be made clear that JLL’s research does not implicitly find that small housing is a force for good. But nor does it find the contrary. What is clear is that small housing solutions deserve a more objective discussion among developers, occupiers and policy makers.

We live in a world where more and more people are living in urban areas – the UN estimates that two thirds of the world’s population will live in cities by 2050 - where households are smaller, people are living alone for longer and urban living is getting less affordable. That’s quite a headache for town and city planners.

Could micro homes help relieve that headache? They certainly could be part of the cure.