10 years after hosting the 2012 Summer Olympic Games, Stratford has outperformed London in both house price and rental growth, creating a new neighbourhood that has attracted a new wave of younger residents.

In July 2005, London won the race to host the Summer Olympic Games. Stratford was earmarked as the core venue for the Games, with the area able to capitalise on the existing regeneration programme that had already been approved in 2004.

Stratford was set to become the “Capital of the East”.

A decade on, JLL have undertaken new research to assess how Stratford has performed since the games. Since 2012 house prices have outperformed the wider market

The E15 postcode covers the areas of Stratford that already existed before the Olympics. E20, a new postcode set up to cover the Olympic Park represents the part of Stratford that went through the biggest transformation during the regeneration to become the Olympic Park and Stratford City developments. Comparing E15 in isolation and Stratford as a whole (E15 & E20) demonstrates the outperformance of the area applies to both existing homes and is not just down to the addition of new build properties in E20.

The majority of the 2012 Olympics events were hosted in Stratford and Greater London, but five other regional towns also hosted events. There was cycling and rowing events in Swanley and Benfleet, Canoeing and rowing in Windsor and Waltham Cross and sailing in Weymouth. 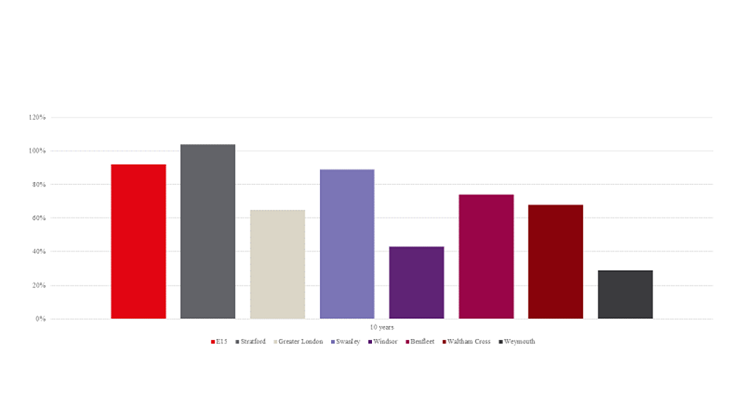 Stratford has become one of the most vibrant areas in London. The population has increased by 42% to 73,000 over the last 10 years largely driven by an influx of young professionals, attracted to the area’s new residential developments, improved transport links, expansive retail and leisure offering. The number of residents aged between 25 and 34 has increased by 10 percentage points in the area over the past ten years, now representing almost a third of residents.

A year before the Olympic Games, Westfield Stratford City Shopping Centre, the largest urban shopping centre in Europe, opened its doors. The £2.1 billion International Quarter London project has also helped Stratford become a key business centre in London. TFL, the FCA and UNICEF have all moved to the area.

Senior Research Analyst at JLL, Eroll-James Kpenou says “Olympic games bring with them the promise of a boost to the host city, but the ongoing success of Olympic venues after the crowds have departed has often been less certain. In the case of Stratford, the Olympic games have delivered on their promise to regenerate a little-known pocket of London into a thriving neighbourhood. A decade on, house prices have outperformed Greater London whilst staying accessible to young professionals. Stratford’s future looks bright with thousands more homes under construction or in the pipeline, the newly opened Elizabeth line improving transport links further and more cultural experiences, with the arrival of the V&A East museum in 2023.”
LondonResidentialNeighbourhood Watch